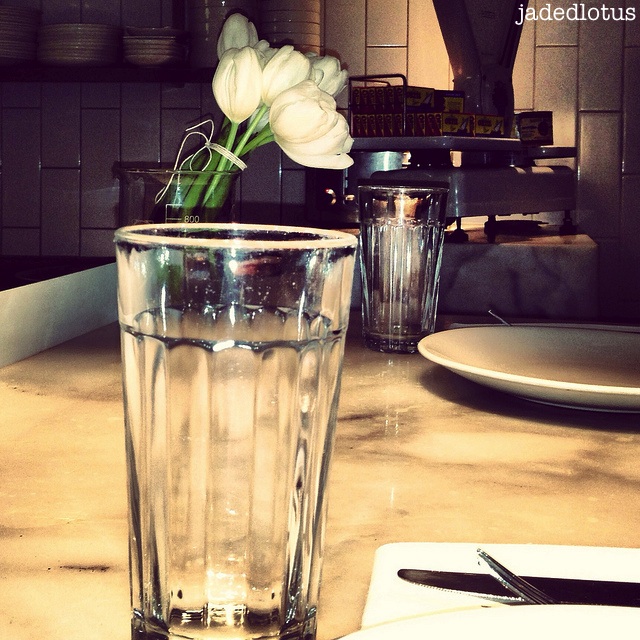 I’m doing July sans alcool in support of the Hub who is doing the same and aiming to raise money for a cancer charity or hospital or somesuch.

The thing about the Dry July arrangement is that donors can buy a dry participant a ‘Golden Ticket’ which allows them a day off. So say someone who is a weekend-only drinker gets three or four golden tickets, it means he can use a ticket a week or thereabouts during July. The result of which is that it’s hardly doing the month dry at all.

Or am I missing something here? I guess it only really makes a huge difference to the DJ participant’s lifestyle and habits if he is a daily or almost-daily drinker. I know the point is raising money – worthy! no argument there -, but as someone who has recently done three dry months with no get-outs, golden or otherwise, I can’t help but feel it’s a bit like cheating.

I won’t lie, I very nearly came unstuck yesterday afternoon. The Hub had opened a bottle of something red from Italy and it smelt simply wondrous. Mind you, I’m not normally a red wine drinker, but I really wanted some at that moment. I didn’t, though, I’m relieved to say, but I was still thinking about it this morning (and now! — because I’ve just had dinner) which just goes to show the funny stuff that goes on in one’s head in prohibition-style circumstances. But for now, I remain on track. 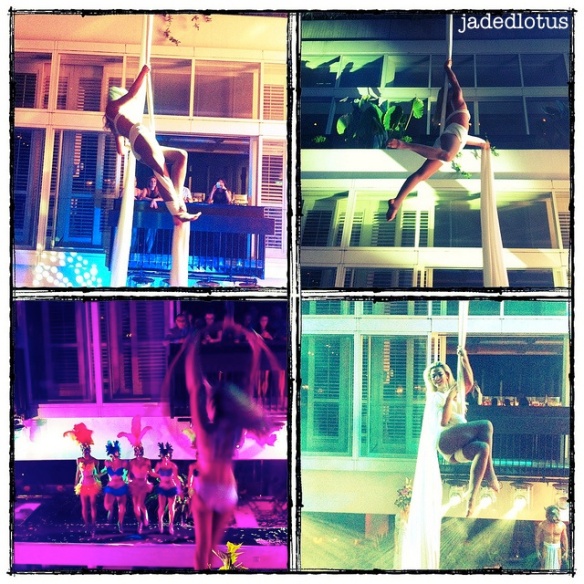 Found myself at Pacha at ivy last night. Just when I thought I was getting too old to be at such places. It was mainly for the Hub who needed to see the place in action for an upcoming something. (I’m being vague, I apologise, but I can’t share more than that.)

As you can see, there was entertainment which I enjoyed but it did bring on the acrophobia and a touch of vertigo… (The quartet of feathered dancers on the ledge in the bottom left pic wore safety harnesses around their corseted waists.)

I was watching from a balcony, and I chose to remain there instead of joining the dancing throng below which means I got home unscathed (no squashed toes) and with barely a bead of sweat on me. Well, I did say I was getting old for this sort of activity so the outcome was perfectly acceptable. 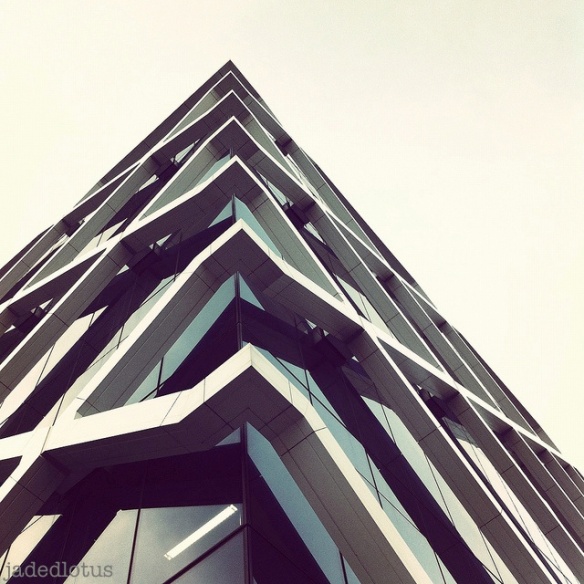 It’s been one of those weeks, harder than expected.

The Hub’s and my work lives contrast sharply these days – he has much more leisure time than I do, gets to choose when he works (or doesn’t, is perhaps more the point).

Last night, I was feeling frazzled and unwell (hello, razor blades for swallowing anyone?), desperate for sleep, and it didn’t help being woken by a tipsy someone whose return from a few hours’ drinking made him unable to comprehend how loud he was being now: blaring television accompanied by noisy kitchen activity to satiate the midnight snack pangs.

Was it Woody Allen and Mia Farrow who famously chose to live next door or across the street from each other (I forget which)? Because sometimes as much as you want to say, “This is my chosen person and what he does is cool with me,” it isn’t when you’re trying to sleep at midnight on a school night, is it?

This morning’s soundtrack: For Whom The Bell Tolls – Metallica 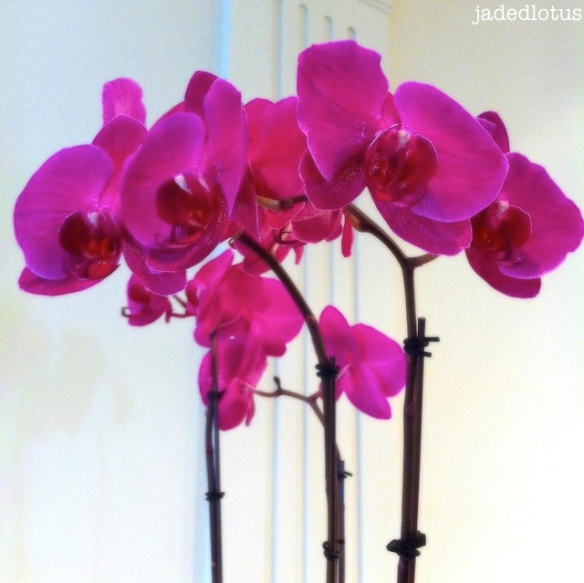 I need a burst of something bright this morning. (I promise, the colour wasn’t photoshopped, nor did I use a flash with these beautiful specimens.)

It’s been an immensely long and challenging week. I had dinner with a cousin and her son on Tuesday – they were visiting from Perth – and was explaining that of late, 12-hour days have been the norm. “But you like your job, don’t you?” she asked, “I suppose that makes it tolerable.”

I said yes, but after yesterday I really wasn’t too sure any more.

But the good news is: it’s almost the long weekend.

Now I can’t stop thinking about this.

Rightly or wrongly, I always associate white blooms with Domestic Goddess… which is so what I’m not, however these beauties are what I currently have at home.

The weekend is upon us and once again, I am trying to fit in chores before I allow myself outdoors. Does anyone feel resentful of the full laundry basket? Do people scowl at the sight of unwashed dishes? I swear I would be quite happy to eat out every night if it meant I could do away with washing up. I dislike the fact that I spend time inspecting the bathroom sink and the counter for water stains, the detritus from the Hub’s daily beard trimming (obviously I leave no mess whatsoever – ha!), etc. And do NOT even mention the vacuum cleaner. That appliance makes me angry beyond all sense and reason. I hate vacuuming much much much more than toilet scrubbing. Now, that makes no sense at all, does it?

We live in a one-bed, one-bath apartment, tiny by suburban standards but sufficient for inner city living so I haven’t been able to justify engaging a house cleaner. Correction: I got vetoed by the Beard-Trimmer. So guess who gets stuck with the bulk of the cleaning.

That’s right. I am having a full-throated whinge.

Which brings me to the soundtrack for this post. Lanie Lane’s To The Horses. She mostly sings about man problems, but in my world, his name is Dyson.

The piece is called Complete? (2010) by Debra Dawes. I snapped the shot, angled from the side. It looks like this front-on and correct.

It did feel like quite the complete day yesterday. Time with the Hub in the morning; chalkboard duty at the restaurant; a couple of hours at the Art Gallery of NSW followed by drinks and nibbles in Woolloomooloo with @smcgillen in the sunny afternoon; finished off loudly (and oh so exhilaratingly) by a Children Collide gig at The Standard with a few friends.

I need to have more Saturdays of the same.